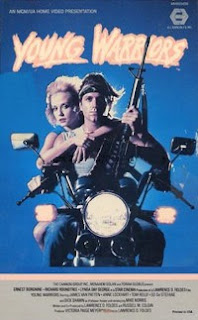 From the back of the original MGM/UA Home Video release:  “What do you get when you cross ‘Animal House’ with ‘Death Wish’? ‘Young Warriors’ – a unique combination of fraternity hijinks, high-speed action, wildly imaginative animation, and hard-drivin’ rock!”

About twice a year, I get some weird call from a company claiming that I won an automatic drawing, and that I have been selected to receive a speed boat, or some crap. Up front, I am totally into the idea, but when they tell me that all I have to do is come down to their warehouse and claim the prize, I automatically suspect it's just the cops trying to bust me for some awful thing I forgot I did twelve years ago. Now, the back of this box has the side show bark down. I was way intrigued by the idea of seeing Paul Kersey and John Blutarsky’s two-headed bastard kid. The proposal of such an unlikely meeting sounds amazing at first, but when you mull it over for a minute you realize you might be getting scammed. Well, since I wasn’t risking potential arrest, I jerked the curtain back, rushed in, and I am now very happy to report back to you fine people that this disgusting mutant baby is very real and not just a bunch of bullshit some yokel made out of paper mache to bilk you out of your money. This one is worth every penny!

Like I said, I was apprehensive that the box had written a check that was likely going to bounce hard, and I was even more skeptical when I realized this was directed by Lawrence David Foldes – a dude whose films are real hit-or-miss for me. While “Don’t Go Near The Park” is a total rager, Foldes was also responsible for the brutally crappy Linda Blair actioner “Night Force.” I was never as impressed by his work that had real money behind it. However, I walked away from “Young Warriors” with a new-found appreciation for the director. Calling this his best effort doesn't really convey how good a movie this is, as it towers high above his others. Granted, there are a few technical faux pas, but the action is rock solid, and it features some ideas that challenge the average rape/revenge mold.

"Young Warriors" tries to be many things, but it never worries about tastefully breaking down the wall of separation between all its elements. Other filmmakers might concern themselves with blending the college humor with the vigilante elements, so that everything feels congruous. Foldes doesn't give a shit about that, and that's why this movie is so great. There’s a satisfying mental whiplash when the film decides to shift gears, as one moment we’re treated to a hazing ritual where some guy is forced to shave his butt cheeks in order to garnish cocktails, and the next we’re getting run off the road in Rapesville U.S.A!  Instead of worrying about everything clashing, Foldes focuses on the quality and the effectiveness of the individual components. The comedy and the characters are good enough to have been from a great 80s sex comedy, while the action side is mean and gritty.

The story opens on a few light-hearted scenes which establish the bond between several characters as they make the jump from high school to college. Kevin Carrigan (played by lesser Van Patten, James) is our central character, inexplicably studying animation while running new pledges through a ringer. Following the vicious assault of his sister, Kevin has a hard time settling back into his usual antics. In fact, he becomes a violent dissident toward the college establishment and even his detective father for failing to bring his sister’s attackers to justice. Craving vengeance, Kevin and his frat brothers decide to form a vigilante squad, which prowls the city by night and (in theory) corrects injustices. However, they mostly just indirectly hurt innocent people in the process, or get their asses kicked. One of the most hilarious aspects of this “urban death squad” is that the frat house’s mascot – a poodle – rides shotgun for most of their patrols. These guys like the idea of justice, and they mean well, but for the most part these sheltered individuals don’t possess any real familiarity with real life violence. Instead, they're only upholding the idea of revenge as seen on TV and films, which does not mesh well with their reality. While our protagonists may have a noble cause, this is a film where the good guys really aren’t so good. In fact, they are contemptibly inept. This profound examination of vigilante violence was and still is very fresh, and is commonly overlooked by most of the film’s critics who discard it as shallow action fluff. There are some really wonderful ideas within the film, for which Foldes deserves more recognition.

Eventually, Kevin and his crew catch up with the guys responsible for the gang rape of his sister, and everything concludes in an unconventional and unhappy way. Foldes’ entire film not only questions Hollywood violence and the perceptions of law and humanity we derive from them, but his ending completely defies the usual clichés you might expect from films of this nature.

Hardly enough of a fault to bring the film down is Kevin’s scantly-featured cop father, played by Ernest Borgnine, and partnered with Richard Roundtree. What little on-screen time they have leaves us wanting more, but that’s not a terrible thing. Other noteworthy appearances include Mike Norris, son of Chuck, as one of the frat boys-at-arms, the phenomenal Dick Shawn as an animation professor, and Linnea Quigley.

Posted by Max Dropout at 4:38 PM No comments: