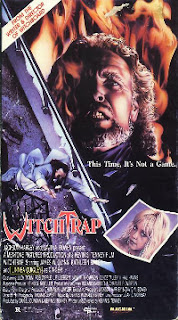 Do you like "Witchboard?"  Of course you do, who doesn't?  Well despite this film being written and directed by Kevin Tenney of Witchboard fame, this motion picture is NOT A SEQUEL TO "WITCHBOARD!"  You will be alerted to this by a notice on the back of the handsome Magnum slip cover as well as a warning at the beginning of the movie itself.  This warning immediately succeeds a trailer to... wait for it... Witchboard.  But it's not a sequel.

It is impossible to begin to review Witchtrap without first addressing the sound, which is entirely dubbed.  Despite the movie's humble budget, (which was spent mostly on explosions, melt effects and Linnea Quigley), it is definitely a movie that wouldn't ordinarily be dubbed.  VHS Summer's own Max Dropout has a bit of insight into this from when he screened this film last year and spoke with the director - he may be able to provide an addendum as to why the original audio was compromised.  It certainly limits its effectiveness as a horror movie, but it adds a great deal of comedic levity, especially the one-liners from the main characters. (We had to get Kevin to the airport fairly early the day after the "Witchboard" screening, but we had breakfast at IHOP on the way to the airport. I was still groggy, and had a mouthful of pancakes when we talked about the audio, so my memory might be slightly warped. I do remember him telling me that the audio was lost -- but part of me recollects him telling me that it was actually stolen, which makes it even weirder. Who the fuck steals the audio for a film? That's an ultimate dickhead move since you can't really do anything practical with it. - M.D.)

The plot of the film surrounds a haunted mansion and its heir, Devon Lauter, who is bound not to sell or demolish it by the will of his deceased uncle, Avery Lauter  He is trying to rid the place of the lingering spirit of his uncle so he can turn the place into a B&B, and he assembles a crew to do the job.  Half of the crew are metaphysical types, half are detectives paid to run security for the operation, and Linnea Quigley is the A/V tech (niiiice!). From the get-go, it's fairly obvious who's going to live and who's going to die.  The story has some interesting points and is executed fairly well with some nice effects, but it's not really the plot that makes this a fun watch, it's the visual style and dialogue.

The banter between the detectives is hilarious.  With lines like, "He may be a walking hard-on with feet, but he's a good detective", and, "I wouldn't drink that if I were you... it's as flat as my ex-wife's chest", there's no shortage of laughs to be had, even if the viewer is laughing at, not with, these characters.  The main character, Tony Vicente, is the best casting job in the movie, by far.  He carries this movie with his partner, Levi Jackson, and their buddy cop vibe works pretty well.  The psychic-type people are thoroughly annoying with their pomposity and crybaby antics.  You start to really wish they would just die in dramatic fashion, which makes a few kill scenes extra enjoyable.  The antics of the Deliverance-worthy groundskeeper, Elwin, are perfectly peppered into the mix to provide a change of pace.

Overall, this movie has maximum camp because of the dubbing and is an interesting (enough) story with an engaging (enough) main character.  It has competent special effects and is visually pleasing from a technical standpoint. It's an interesting little flick that, like the spirit trapped in Laughter Mansion, will be confined forever to VHS.  Floating somewhere in the late '80s between "Witchboard" and "Witchboard 2," and featuring scream queen Quigley, Witchtrap does well to live up to its tagline "This time, it's not a game"....   wait, "game"... like a Ouija board? Last time!?!  JEEZ, IT'S NOT A SEQUEL!!

Sadly this film has no YouTube presence in English, however... 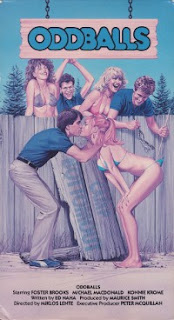 By nature, the rip-off is unapologetically cheap and undignified. It doesn't kid itself about what it is. It’s there to bank off of someone else’s already-successful mold. I’m not one of these guys who gives a shit about originality. I care way less about who did it first, and more about who did it BEST. Granted, there are some really lazy rip-offs out there, but there is such a thing as a good rip-off. The good rip-off strives without shame to clone and amplify the greatest elements of its predecessor, and sometimes the results can even surpass the original because it distills it down to only the best parts. I say, if theft results in someone making better use of whatever was taken then it is not a crime.

If you look to your left, there’s a whole lot of lure-fluff and hook. This is obviously trying to sell you Summer camp boner jam that took a bite off the “Meatballs” craze, and that’s a good thing. Still, I've been on my game a long time. I’m no stranger to the box art bait-and-switch. I've been hustled enough to know when someone is running a game on me, and the “Oddballs” box art tripped the alarm. Amid the camp setting, you have bikini babes, and camp councilors cheering on their buddy as he moves in for the kill. Hell, it even has “balls” in the title. Still, there was something suspiciously flat and generic about the overall composition of the art, and I was right to be wary. No one even remotely similar to any of these characters actually appears in the film, so if you’re hoping for something that’s on the “Last American Virgin” track, you can forget it. The protagonists are actually a pack of pre-teen boys, who are hell-bent on getting laid before being shipped back to their respective homes. Of course, the kids aren't really old enough to get into any truly raunchy trouble, but they are a refreshingly realistic stereotype of adolescent horniness, and some of the situations they get into are still suggestive.

There’s not much of a plot to report back, really. A bunch of savvy delinquents get shipped to Camp Bottomout, but their libido-driven hijinks are jeopardized late in the game when some asshole winds up purchasing the place for a future shopping complex. But much like any pack of dysfunctional family members who boast of their hatred for one another, when something threatens the sanctity of what is theirs they go to war to defend it.  It’s a story that’s been done to death over the years, and this is no fresh variation. Rather, it is a standing rack upon which tons of terrible jokes are piled to the point of near-collapse.

The first fifteen minutes of the film are amusingly mortifying. Right off the bat, it just reeks of definitively Canadian low-rent production values. It has the oppressive atmosphere of “The Kids of Degrassi Street,” which is endearing in some ways if you’re a fan of that sort of stuff. The gags are so cornball that they are almost surreal, but at the same time the writers have married into them a certain grim attitude. The meanness of the humor occasionally perforates the sophomoric surface like a shark fin, totally hinting at the dark force operating the bubbly, candy colored mascot suit from the inside.

A big piece of broken glass at the bottom of the kiddie pool comes in the form of comedian Foster Brooks, who plays kid-hating camp owner Hardy Bassett. Here, Foster plays a variation of the Lovable Lush persona which became popular on the talk show and variety hour circuit during the seventies. He toured and appeared with the Lush gimmick for years, but it was always considered comedy for the sophisticated adult market. One of the main points of genius to “Oddballs” is that the creators have taken the Lovable Lush, tacked on depression and suicidal tendencies, and PUT HIM IN CHARGE OF KIDS!


At one point, Bassett is chastised by his daughter for hiring a convicted child molester to serve as one of the councilors before the film cuts to scene where a flamboyant homosexual has a heart attack while huffing poppers during his morning exercise drills with the kids. Topically, it’s a dark moment for something that was probably intended for a teen audience, but the humor which surrounds it comes in such broad strokes that it makes it palatable. The sharp edges are wrapped in soft stuff and that’s what makes this movie brilliant.

While Brooks steals the show and plays the only characters with a real arch, the rest of the cast are likable enough to keep you invested. The movie is routinely accused of being bogged down with bad acting, but in the performances are in line with the goofball material. It's strong for the sort of acting that it is. There are some solid comedic performances here, particularly from the younger cast members. Even the production design is solid despite the low production values. While it’s definitely not as polished as “Meatlballs,” its intelligently mixed styles of humor easily make "Oddballs" the superior film.  If you don’t hold the fact that you won’t get the nudity-saturated sexual situations the box hints at, you’ll still be in for a strange and satisfying ride that delivers a few bawdy shots in spite of the kid cast.

For the total nerd out there, the script was penned by Ed Naha, who was also responsible for polarizing works such as "Troll," "Dolls," "Spellcaster," "Wizards of the Lost Kingdom," "C.H.U.D. II: Bud The Chud," and "Honey, I Shrunk the Kids!" That's a career!
Posted by Max Dropout at 2:17 PM No comments: