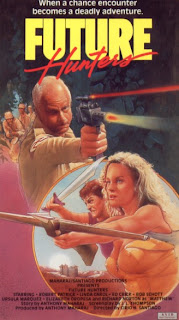 I knew when I picked up this movie it would be good simply by judging the box.  Never mind that hunting the future is a stupid idea that is impossible.  Never mind that this is Robert Patrick's first film and his acting skills were probably not yet up to the level of his trademark role, a robot.  There's a scantily clad lady with a crossbow, T-1000 holding a scimitar, and a Nazi shooting a laser-sighted uzi in the jungle.  Boom, I'm already sold.  Then I scanned the credits.  *Double gasp* This movie was directed by Cirio Santiago, esteemed pupil of Roger Corman, and written by J. Lee Thompson, whose fingerprints are all over my two favorite Bronson flicks, "10 to Midnight" and "Kinjite: Forbidden Subjects" not to mention many more traditional film classics like "Cape Fear" and "The Guns of Navarone".  Still, I had to keep my expectations reasonable, I didn't want to set myself up for a let down.

I wasn't let down.  "Future Hunters" starts in 2025 with post-nuclear wanderer, Matthew (Richard Norton) searching for the the Spear of Longinus, which pierced Jesus' side while he was on the cross.  He hopes to harness its supernatural powers to save mankind just as evil warlord Zaar hopes to obtain it for destruction. As Matthew touches the relic, he is transported back in time to prevent the nuclear holocaust. Upon arriving in 1986, he gives the head of the spear to a young couple, imploring them to find a man named Hightower who can protect the artifact.  The man from the future dies of mortal wounds in Slade's back seat after saving the couple from would-be attackers in a biker gang.  Here is where we meet our protagonists, Michelle and Slade.  It's kind of funny, but these two lovebirds don't seem to like each other that much and seem to bicker at every opportunity. Maybe they just need a wacky super dangerous world-saving adventure to rekindle their romantic essence...?

As the gung ho Michelle and reluctant Slade attempt to learn more about the spear and look for the man named Hightower, trouble starts heading their way.  I was pleasantly surprised to see that the main henchman, Bauer, is totally the guy who played Thorg in "Gymkata", Bob Schott.  He's like Dobber from TV's "Coach", but bigger and a Nazi.  Bauer works for a power hungry Fielding played by Ed Crick.  Crick's portrayal adds a certain bit of silliness to the movie since he has kind of a Glenn Beck/Rush Limbaugh look.  The adventure vibe is officially ramped up by about 7-8 minutes of straight kung fu action that is hilariously crammed into the beginning of the second act of the film.  I won't lay out the sequence of events, but I will say this film has Mongols, Pygmies, Amazons, Bruce Le, Jang Lee Hwang, helicopter chases, and alligator pits surrounded by fire. 'Nuff said.

Another pleasant surprise was the wonderful, if not overly ambitious, soundtrack and score.  I was moved to look up the music credits and found that Ron Jones was responsible.  His credits include Star Trek TNG, Family Guy, DuckTales, and Chip and Dale's Rescue Rangers.  It's plain to see that this film was an excellent demo for him.  While the editing was uneven and silly, the music itself was great, especially the Amazon themes which reflect an acute Enter the Dragon influence (anyone who knows me knows Lalo Schifrin is one of my favorite composers).

This movie has lots of great action, killer 80s synth music and scoring, and really cool locations in South Asia.  It manages to balance the action and plot well despite the slow first act.  It gets more fun as it goes along and builds to a heroic ending.  I will definitely give this another spin sometime with friends, but will definitely look for a different copy than the SLP mode copy I happened upon. I was very pleased to find this little piece of history and would recommend it if you need a bit of fun.

In lieu of a trailer, here is a clip from the kung fu portion of the film...