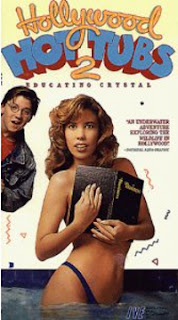 This shallow sequel to the 1984 sex comedy classic “Hollywood Hot Tubs” only taps a few of the ingredients which made its predecessor so endearing, but it takes more than a few boobs and bubbling whirlpools to protect it from the rest of itself.

In the original film, prankster delinquent Shawn is treading on thin ice after vandalizing the landmark Hollywood sign by changing it to read “Hollyweed.” He’s given two options: repeated, random sodomy in prison, or going to work at Hollywood Plumbing with his uncle.  Naturally, he chooses the least rape-filled option and soon he is thrust into a seedy underworld of massage parlors and bath houses. Among the bevy of colorful characters we’re introduced to are mother/daughter duo Pam (Remy O'Neill) and Crystal, who run the venerable Hollywood Hot Tubs. While Crystal, a slack-jawed valley girl whose jiggles frantically under her tube top, is more of a peripheral character in the first film, she takes the central role in the sequel.


The fact that this was produced six years after the original made me a little wary to begin with. Even the unfortunate brightness and color scheme of the box screamed “don’t do this!” Coincidentally, the “Hollywood Hot Tubs 2” box actually bears striking similarities to the art for the terminally wretched “Hardbodies2” – the worst sequel of all time to one of the greatest sex comedies ever. I don't know what the fuck it is, but there are actually a bunch of past-due sequels that feature boxes with white backgrounds and aqua/yellow lettering. It's like some subliminal military warning code that something is going to eat shit.

There is an overwhelmingly good idea at the heart of this sequel: the return of Crystal, once again played by Jewel Shepard, who is easily one of the best and most memorable characters from the original film. While Shepard is primarily known as a B-actress, she was always more than just a solid rack. Shepard coupled centerfold perfection with great comedic ability. There were plenty of actresses from her period who had no trouble baring all, however Shepard easily transcends them by not only being hot, but by being a hot COMEDIAN.

Shepard is always a joy to watch, but I wasn’t sure if anyone could extract a good full-length feature based entirely on the Crystal character. While “Hollywood Hot Tubs 2: Educating Crystal” is anything but good, it’s not a failure because of Shepard. Once again, she’s wonderful here. Unfortunately, everyone that surrounds her is unlikable, and the story itself trades in the real heart and grit of the original film for cartoon laughs.

Our tale begins with Crystal in a mild panic as Hollywood Hot Tubs falls into minor disrepair, which does not bode well for her bid to take over the family business. On the side, the man responsible for the upkeep, aging guitar guru Darby (JP Bumstead), is being hounded to join a band called Brain Dead. In the midst of it all, Crystal’s mother, Pam, is being woo'd by the swarthy sheik Prince Ahmet (a waste of veteran Bart Braverman) who wants to turn Hollywood Hot Tubs into a publicly traded franchise. Crystal is desperate to prove that she has what it takes to run the place, so she enrolls in business school, where she meets the obnoxious Jason. Jason convinces Crystal to let him mold her into a respectable character, hence “Educating Crystal.” At some point, Prince Ahmet’s chauffeur, Gary, spots Crystal and falls madly in love with her at first sight. Gary is also a struggling author who’s attempting to cobble some horrible romance noir crap together, and he thinks Crystal just might be his muse. Eventually, Gary discovers that Ahmet is plotting to marry Crystal’s mother so he can snake Hollywood Hot Tubs out from under her. Seriously, it’s a boring fucking mess that alienates itself tonally from the original film. The sub-plot with Darby really drags this thing down; it’s given too much time, but not enough for Darby to feel like a real character. Aside from that, Bumstead wasn’t the right guy for the part.

Speaking of poor casting, it doesn’t get much worse than Patrick Day here, who plays the Higgins to Crystal’s Dolittle. This has rarely been said, but this is one of those instances where Corey Feldman could have really elevated this project. Rob Garrison ("The Karate Kid," "Punk Vacation") also has a small part here as Billy Dare, a cockneye British hair rocker who's out to prevent Darby from stealing his spot in Brain Dead. I couldn't even get excited about that.

I have trouble believing that those responsible for this sequel held the original film in any sort of high esteem. While the original Hot Tubs digresses into utter insanity, the bulk of the film feels very real up until its wild finale. There’s depth to the relationships, and some of the performances in the original are alarmingly strong. The sequel on the other hand is pretty much just a goofball comedy from start to finish, and it is lacking a prime ingredient: The seedy environment. In “Hollywood Hot Tubs,” we’re treated to a custodial-bird’s eye view of Sunset’s sex culture. Here, Hollywood Hot Tubs has been transformed into an innocuous health spa, complete with juice bar. The adult aura and sense of taboo are nowhere to be found. No one’s jaded or just out to get laid, and that’s the problem. None of the characters are sexual or interested in sex. It's a movie that has tits and some jokes, but that doesn't make it a sex comedy. Instead, it's a romantic farce about a day spa making its IPO. It's a movie that accepts and settles into its own cheapness, and never really bothers to get dirty. Altogether, this is a depressing lack of effort.

I couldn’t find a trailer, but here’s some of the magic from Part 2, featuring Patrick Day as Jason coaching Crystal on how to be a better business woman.