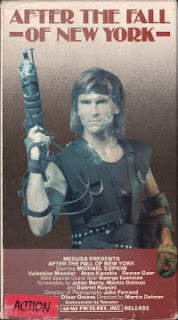 No doubt that the term “ripoff” is rarely used in a positive light when describing a movie. The base word even connotes violent extraction. When you receive something of lesser value than what you paid for, you might say you’ve been ripped off. Any time somebody refers to something as a “ripoff” it’s bound to be an accusation rather than a term of endearment. You never hear anybody say, “man, that was a great ripoff!”
Sergio Martino’s “2019: After the Fall of New York” is routinely trapped, tagged as some “Escape from New York” ripoff, and tossed back. Sure, it's obviously derived from other more popular films. In fact, this Spaghetti Apocalypse also braids together an overwhelming host of elements from familiar future bummers such as “The Omega Man,” “Death Race 2000,” “Max Max,” and “Planet of the Apes.” The influences are plainly all over its sleeve, but calling this film unoriginal isn’t entirely fair or true. That would be like calling Edward Hopper a hack simply because he didn’t invent the paint he used. In much the same way an artist might work in clay, Martino uses other films to create something that is unique and original in its own way to create a total rager that might actually be better than a few of the films that inspired it.

Set after certain nuclear doom, the world is now a radiation infested wasteland teaming with elegantly spiked barbarian types, all of whom are sterile and dwindling toward extinction. Amongst them is Snake Plisken clone Parsifal, a celebrity of the times with a shadowy past who sees fit to spend the last of his days competing in lethal demolition derbies. Shortly after his latest victory, the spoils of which are some gold and a hermaphrodite, Parsifal is tapped by the Pan-American confederacy and spirited away to an Alaskan compound. Hefty promises are made in exchange for his mercenary services. The job: penetrate New York City and extract from it the last fertile female on earth. Unfortunately, the island is now inhabited not only by rat-eating warlords, but a sleek and nihilistic governmental faction known as the Euracs.

Parsifal’s odyssey through the bombed out Manhattan borough features a colorful call list of mutant scum, some of whom become useful allies in his effort to repopulate mankind. Like I said, the movie proudly waves its influences in your face, but then there also a handful of curious references scattered throughout the film. For instance, one of Parsifal’s mutant helpers is a dwarf known as “Shorty.” We’re first introduced to Shorty when he’s mistaken for a child by a pack of blood thirsty rat eaters. Upon discovering that he’s merely a dwarf, one of the scuzzy villains refers to him as one of those “time people” – perhaps in reference to Gilliam’s “Time Bandits.” And certainly not least, there’s the simian-faced rebel Big Ape, who is perhaps the most memorable character Parsifal encounters.

There’s no denying the level of enthusiasm which powers this Frankenstein of familiar parts, but it is entirely held together by a fresh mortar of imagination and creativity. There are tons of terrible post apocalyptic themed films out there made by assholes who think all they need to make a successful film of this nature are the keys to a junkyard and a few punk jackets. The aesthetic of a destitute future is probably one of the cheapest and easiest to achieve. We get the grit and rubble galore here, but it's also infused with an element of fantasy. There are a lot of sleek design elements that give this movie its own identity. In particular the medieval design of the Eurac soldiers on horseback are something entirely different from not only everything else in this film, but for the genre altogether. Beyond that, the script itself is great, and the cast is strong. Much credit must go to Michael Sopkiw who plays Parsifal. Beyond raw charisma, he also makes the part his own rather than trying to imitate actors who portrayed the characters his role is no doubt modeled after. Honorable mention also goes to the odd and lovely Anna Kanakis, who provides an ample dose of villainy despite her limited time on screen.

The only motive anybody could have for calling "After the Fall of New York" a ripoff is that it's convenient or easy. It's a cheap conclusion, which is ironic and hypocritical because these same people fault the film for its low production values. It may have that strange, dated feel that is so prevalent throughout eighties Italian productions (which I find personally appealing), but overall the production has a much grander feel to it than the Castellari’s Bronx films. Despite some obvious miniatures, which are still well-done, the action and the sets feel epic in scale.

Overall, this is not fine cinema, nor is it intended to be. It is technically made well enough to let you completely escape into its world. It also manages to exceed expectations and even trump its influences to some extent by virtue of the fact that it follows that Italian methodology of distilling and multiplying the best parts of what makes something classic. As an experience it is purely fun with no wasted moments.